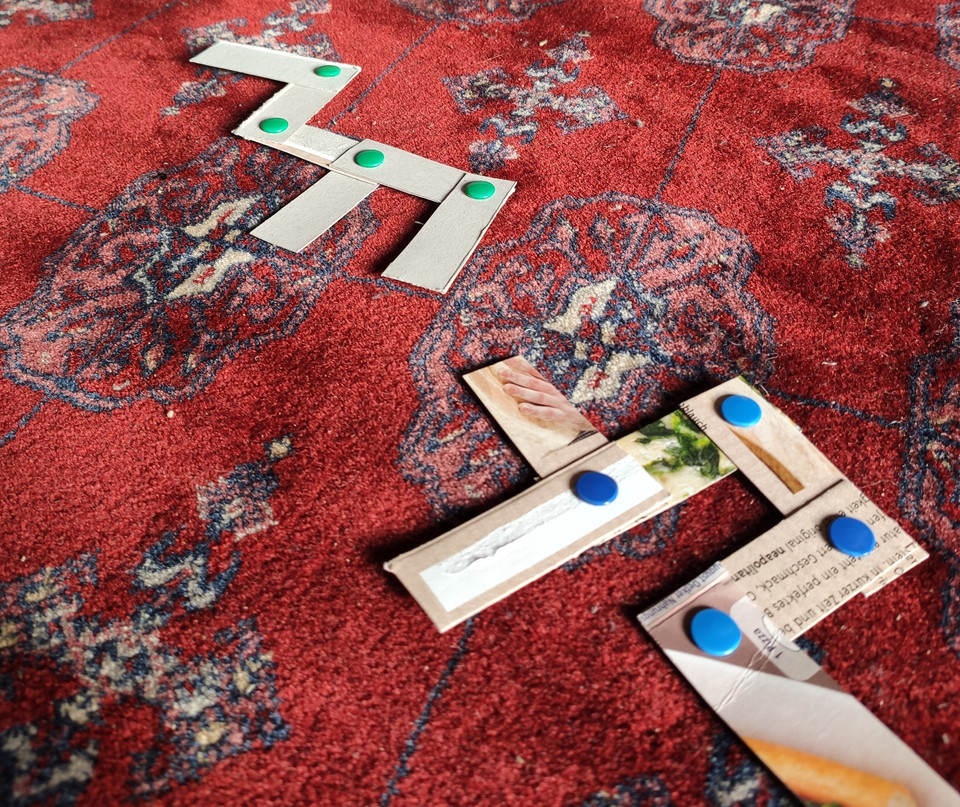 In what scenarios can subtraction be beneficial to a body?

This issue was our point of departure on Day 1. We cut up some frozen pizza boxes into small rectangles to make limbs. Using thumbtacks as joints we started playing around with linking them in composite structures. With the joints serving as pivot points, these simple constructions quickly gained the qualities of moving bodies. Our game began to formalise as we were learning to walk these oddly shaped creatures.

Each player is given 10 limbs and 5 pins. They are free to join these as they like, provided that the limbs make 90° angles at the joints.

Each jointed body is then given its own ground line to travel along.

Taking turns, players roll a dice. Their role determines the moves they can make. The number rolled restricts the number of joints that can be locked in a forward movement, counting from the furthest foot touching the ground upward. Players move forward through a rotation from the resulting/ chosen limb. The goal is to travel as fast as possible; or, to beat the other players.

Each limb with a loose end is a stub. A stub is a foot if it rests on the ground.

We considered whether the body should have the power to lift itself up. We settled for giving muscle power to feet only, which can push off the ground. The whole body was always subject to gravity from the ground along which it was traveling, meaning that it would always fall down to its lowest point if a foot was lifted off the ground as a result of any given movement.

We struggled to get a clear idea of the impact of locking joints. Sometimes movements were simply rotations around a chosen joint, other times 'unlocked' joints transformed the configuration of the whole body. Modelling the desired emergement movement from locking joint would be easier through a computer simulation.

Folding stubs back on the body turned out to be a useful method for speeding up movement. At some point we also experimented with the option of removing a limb as a valid game move. This was useful, as with fewer joints a lower dice roll was needed to rotate the entire body around the front-most joint, which would always result in covering the farthest distance.

Effectively removing limbs, this was a way for us to start to imagine possible benefits of subtraction.