This post gives an overview of some of the points we discussed during our first design session at our Berlin studio, 10th-12th February 2020. 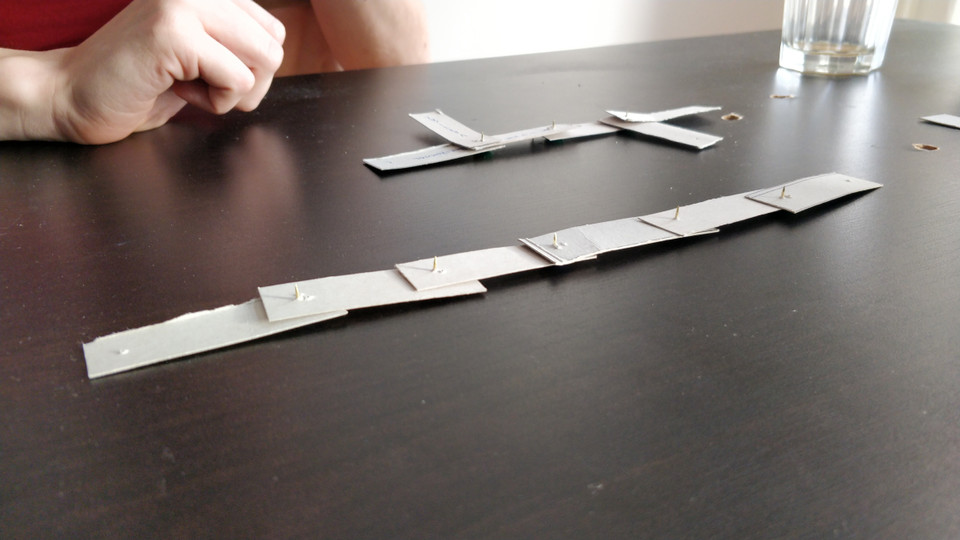 As we chose the topic of ‘subtraction in the real world’ for our first attempt at a crazy eights exercise, we spent a few minutes thinking of examples of subtraction individually and consequently a long time discussing it together. I found this useful as we’ve made ‘subtraction’ central to our envisioned game, but we still haven’t really decided how we want to use it, or in what ways it could make for interesting game dynamics. This of course starts with the issue of what exactly counts as subtraction. In our brainstorming session we defined subtraction through for example giving birth, mining, mowing the lawn, shaving, sitting in a math class subtracting numbers, loneliness or car-free roads.

The process of extracting rubber from a rubber tree eventually led us to a conversation about parasites - another way in which we found it possible to understand subtraction in the real world. The use of this term coincides with the Oscar winning movie and topic of this semester’s Studium Generale at KABK. The parasite extracts, or subtracts, from its host for subsistence. It is dependent on it and close in a way that could be viewed as intimate, yet it needs to maintain its distance and distinction to remain ‘parasitic’.

Thrown out, waste is displaced. It is moved out of sight, categorised differently, we give up our responsibility for its matter. Our discussions about subtraction also got us thinking about the fact that traces of your actions in a game are often immediately dissolved. The path you walk, the things you consume, the enemies you kill all tend to disappear without a trace once the interaction is done. We thought it could be interesting to preserve traces of these encounters in a game. Ghosts of the consumed resources could for example cross your path once more at a later point in the game, or simply accumulate in the surrounding environment continuously.

4. Finding ways to make the strategy game more dynamic (or not)

We spent a lot of our time together playing the table-top strategy game (move-split-stick-flip), so the game also subjected a large chunk of our conversation. Besides commenting on the process and one-another’s moves, our primary concern was to consider whether the game could be made more dynamic. We hypothesized versions where randomness is introduced, pieces can die or resurrect, shapes can move a different number of units, or a player’s number of turns per round is determined by the number of pieces they have on the board at the start of it. We tried the latter two, but in both cases we concluded that the initial version was better to play.

Roel brought in a set of composite shapes made from up to 5 or 6 isosceles triangles. We briefly discussed that these could be the basic shapes for another game, probably a strategy table-top like game, similar to the one we had been playing for over an hour by that point. The advantage of connecting triangles could be that they potentially make more, and more diverse shapes. One thing that we agreed was particularly strong in the game we were already playing (move-split-stick-flip) was that the movement of the shapes was inherent in their form. At the given point in time though, we were not really up for making another table-top strategy game. And were we supposed to be working on strategy/ board games to begin with?

6. Envisioning the deliverable in June

An important issue we thought about was the form of deliverable that we are working towards having by the end of June. The type of deliverable and its target audience will inevitably influence the way we will be working. We considered especially whether we want to aim at making a game game - somewhat commercial - or whether we want to use the process of game making as a part of a more general artistic/ theoretical research to begin with. Working towards a game would mean that we need a single playable prototype with concept art etc. by the end of June. An artistic approach gives us more liberty, but also less guidance. Our conversation on this topic left off at the idea of making a video essay, which would serve as a neat presentation of a broader body of theoretical and other research: voice over, combined with images and screen recordings, partly made from several possible game prototypes.